Amid a lot of literal and figurative cloudy weather, I found the perfect golden window other day for a walk.  Nothing like leg stretching and photography experiments in the sun to make me feel better about the world. Okay, a mountain top would beat it, but hey.   Rocks, moss, leaves, a passing seaplane, wings of a dove, er, seagull, and my boy Jackie Chan.   Seeing him cut loose on a beach would prompt a smile from the biggest curmudgeon.  All is right with the world. Well, mostly. 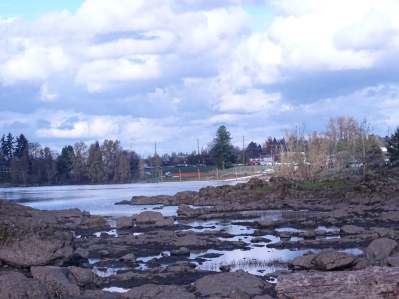 Along the water, ready to run 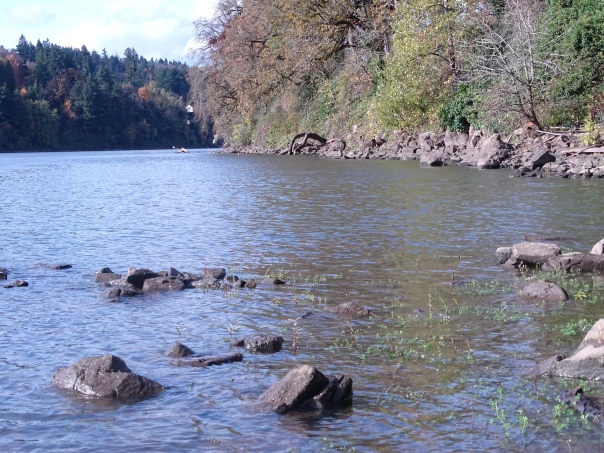 In the middle of a stretch of long days at work, it was nice to take a riverside walk with Denise and Jackie Chan the other day.   It was another chance to play with my new camera as well.  The weather was terrific, and we lucked out seeing a great blue heron as well as other waterbirds.   The water level has risen with autumn rains, and the Willamette’s shore is very rocky, so we had to pick our path with care.  We didn’t go far, but a short trip in nature is always a good thing. Happy trails. 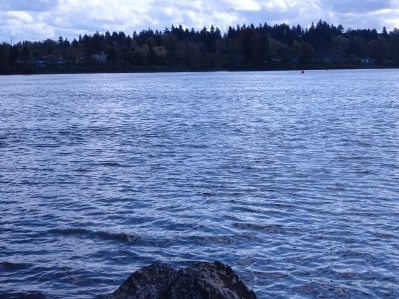 A jumping off point

The patterns on this wood seem like a map to me

This may be a beaver skeleton 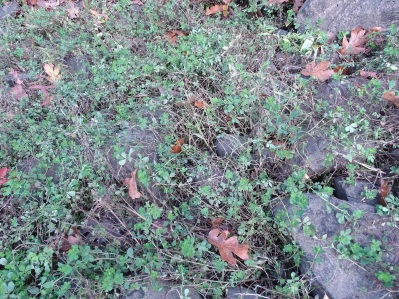 A net of weeds growing on rock

Playing with light above and below the surface

Man’s Best Friend and a Murder of Crows

Today I had to get out of the house, and I was lucky enough to hike with Jackie Chan.  We visited Elk Rock Island, as I had the other day, but the weather was very different.  It was dry but gray and cool. I found a new spot to scramble on mossy rocks that’s out of the way.  Jackie was pretty excited about a sandy spot among the rocks, but he was content sniffing everything in the woods, too, including some very cool small ferns.  Unfortunately, his mere presence seemed to spook some crows as I was trying to get a better shot of a large group of them.  Does any reader know why it’s called a murder of crows?  Enjoy the photos. 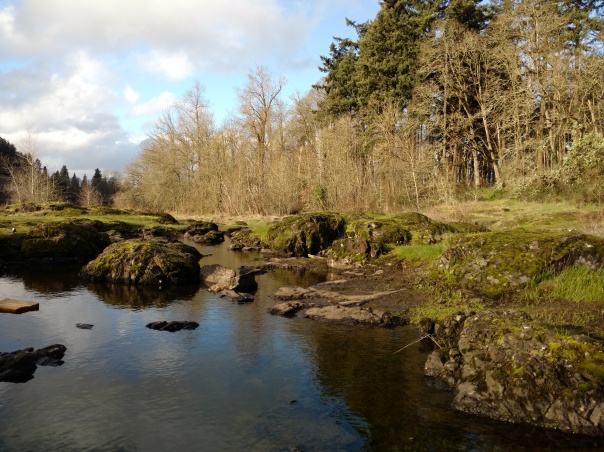 Not bad for five minutes from home

I have written of Elk Rock Island in previous posts, but I hadn’t been there in months.  Spring Park, the access point, was closed for some time for maintenance. Today I found out what that meant when I zipped over there after the first half of the Trailblazers game.  North Clackamas Parks & Rec crews completely resituated the access and revamping it so it will not bog down in mud, and the grade is improved. They put in a bridge over a little boggy area and a resting spot over a side channel.  Nice work. 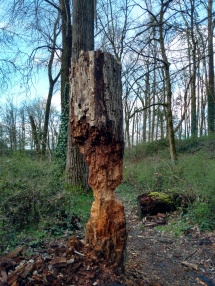 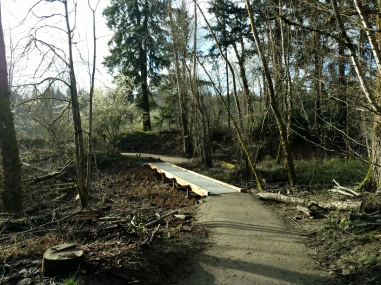 New bridge on the approach

How about that light on the madrone? Magic.

Walking on Elk Rock Island is neither epic nor exotic. Yet it is a small natural oasis Portland area residents should treasure.  I know I do.  My experience today was very different than my previous hikes here. With winter rains collecting in spots that are bone dry in summer, and water level high enough to cover part of the north side beach, the overall feel of the island was very different.  That is not a bad thing. The light on the now mossy, grassy rocks on the south and west sides was amazing.  Without leaves on the cottonwoods, the forest high on the bluff was much different, with sneak views in various directions.  The beach area was gloomy in the shade, so I didn’t dally there. By the time I circled the island, the light was already shifting, but the views were still great. Something about the water made me look forward to getting out in a kayak when it warms up more.  Happy outdoor adventures, everyone. 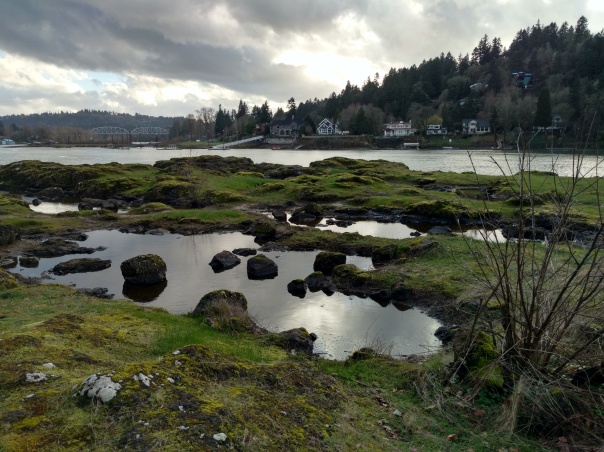 The foreground makes me think of the U.K

Rock Hopping to a Heron’s Roost 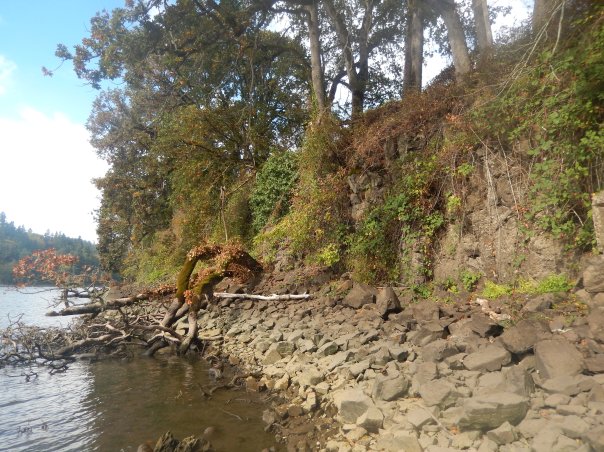 At a secret location near Milwaukie, Oregon, I took my boy Jackie Chan for a river shoreline stroll.  This is no typical shoreline.  Hardly a sandy spot in sight, and the one we found was protected by audibly possessive Canada Geese.  One of the curious attributes of walking near a major metropolitan area is the juxtaposition of natural elements with manmade elements.  It was no different this afternoon.  I found remnants of what I believe is a dock, floating lumber surrounded by old stumps, and a heron badgering a kayaker when it neared the roost.

The walk was almost entirely on rocks, so we did not move quickly. Yet with a narrow focus on nearby objects rather than on distant viewpoints, I found it endlessly fascinating, and very peaceful.  Seeing the heron take off multiple times with a great squawking, gracefully soaring over the river, was a highlight.  I only wish I had a better camera more suited to catching a magnificent creature in flight.  Perhaps next time. 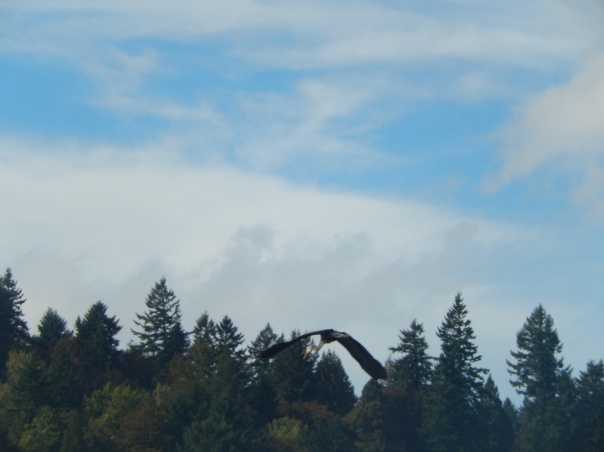 Oh, for a better camera…

Local Getaway on a Sunshine Day

One trail to the banks of the Willamette River is about a three minute drive from my condo.  On a sunny afternoon, it makes an easy getaway for Jackie Chan and me.   Due to subnormal precipitation levels, the waterline already looks like it’s at midsummer levels.  That means it is an easy walk across the channel to Elk Rock Island.  I’ve mentioned the island at least once before in my blog, but it bears repeating. 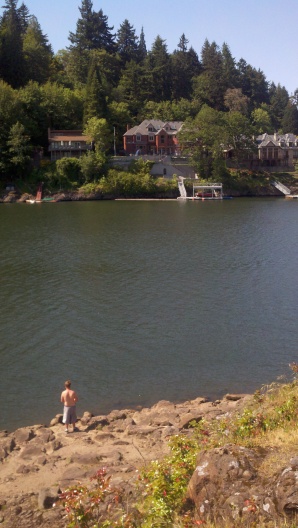 A lone fisherman across from upscale Dunthorpe homes 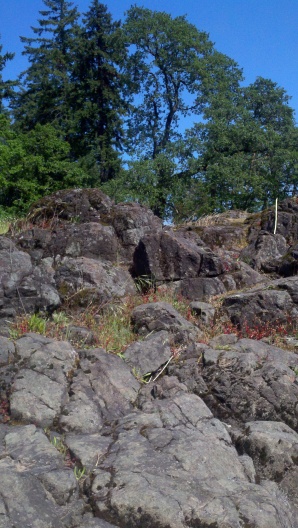 Clambering around on the rocks was fun 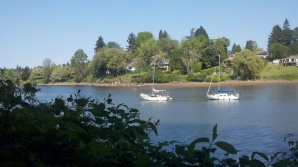 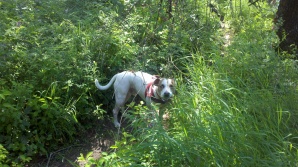 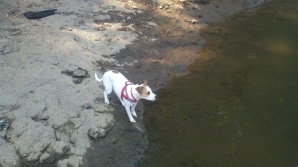 Jack is still not sure about the water 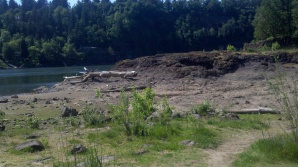 The south end of the dry channel

Having a natural spot with multiple ecosystems close to home is a treat.  The dry channel we cross resembles a desert landscape (compare to the second photo from this February post),  while the shorelines are a mix of beach and rocky ramparts.  The center of the island rises up with groves of both Douglas firs and alders, along with small meadows.  Fisherfolk were out in force, along with pleasure boaters nearby.  I could happily have wandered the island for hours in the perfect weather, especially on the rocky southern and western shores. 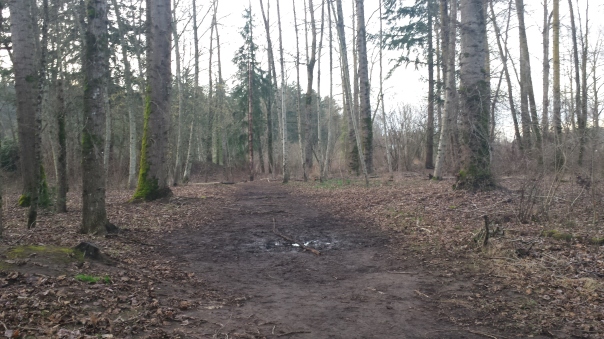 Last summer and even in the fall, I visited Spring Park and make the hike to Elk Rock Island multiple times. This involves a short hike to the bank of the Willamette River. From there, for half the year, the water is low enough to rock hop a side channel and get to the island for exploring.  Not in January.  It is now high water.  Such seasonal dichotomies fascinate me and sustain me even as the weather and my ridiculous work schedule conspire to eliminate lengthy excursions into the mountains. 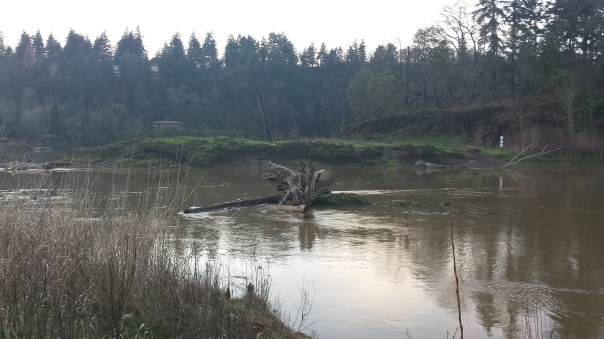 A Brisk Walk Between River and Train 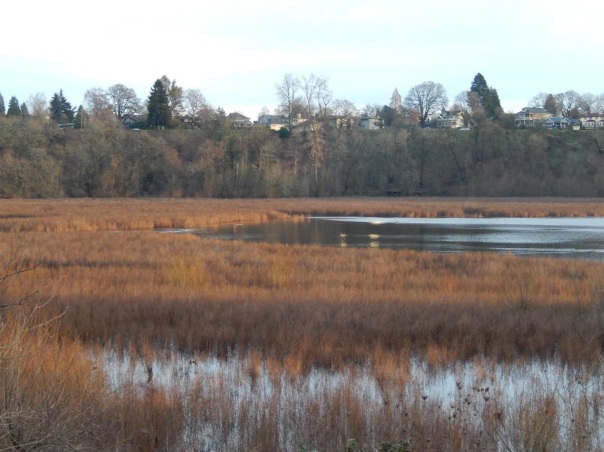 The waters of Oaks Bottom in afternoon light

I have walked all over in the Oaks Bottom area in Southeast Portland.  Some of those rambles have been documented on Hiking Northwest posts.  But I’d never walked on the Springwater Corridor bike path along the banks of the Willamette River, heading north.

I wanted exercise and I wanted to see some new perspectives on the area.  I got chilly but walked fast with my pup by my side.  With lots of cyclists and joggers around,  I had to keep Jackie leashed. 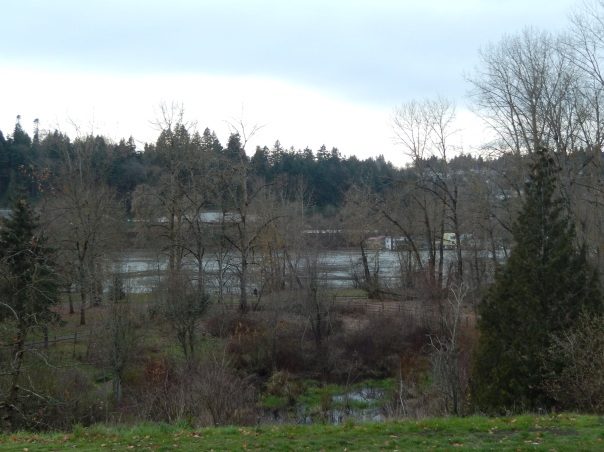 Looking west near the parking lot in the Sellwood neighborhood

I got a special treat when I encountered a holiday steam locomotive giving passengers rides back and forth in the area.  Looked like fun. 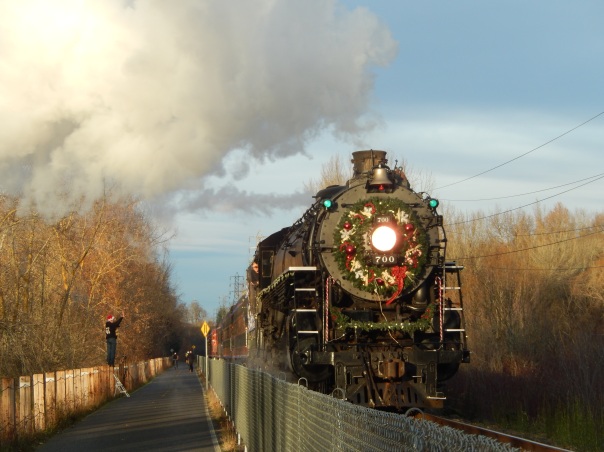 Lots of people were out on the trail, but few were simply walking.   There were serious cyclists who buzzed by as if the rest of us were annoying,  casual jogge4rs, one very serious runner in very short shorts, and even a pair of inline skaters.   They were not wearing neon. 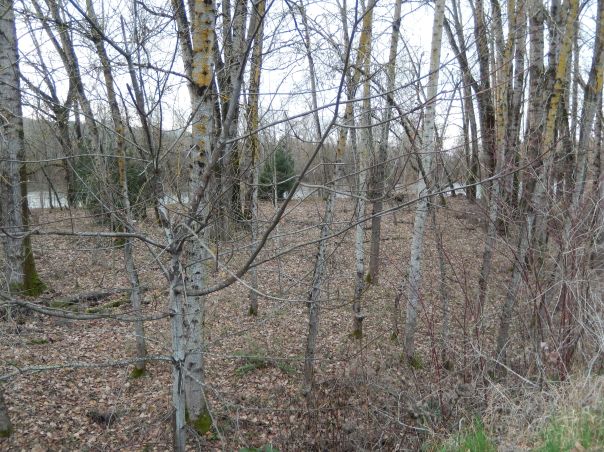 I liked this strip of hardwood trees

When my wife and paddled to Ross Island last summer, we’d seen the path break into the open along a steep bank.  Now I wanted to get to that spot, but it was farther than I realized.  I walked fast, but daylight was waning rapidly. 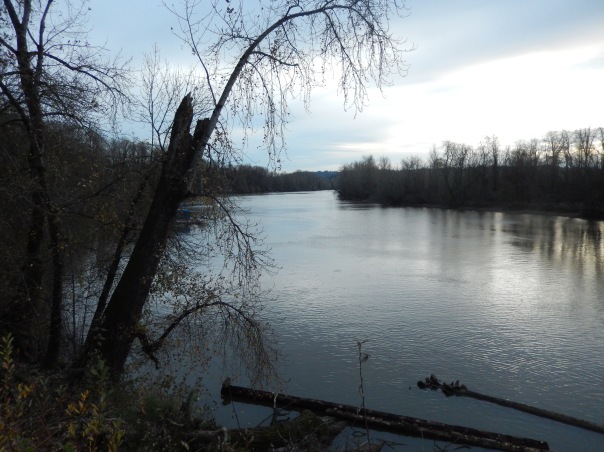 Looking upstream from my endpoint

Along the way, I stumbled onto a special steam locomotive holiday train.  It passed me one way and later passed me another way on the return trip.  I wanted to enjoy the moment more, but it was chilly.  Jack was shivering.  We were both glad get back to the car and head home. 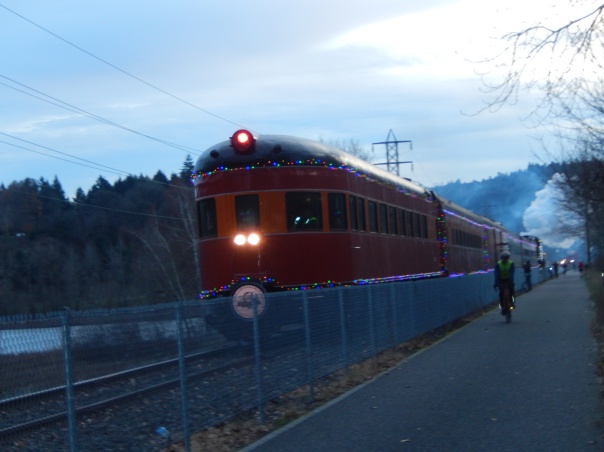 The tail end of the train was cool, too 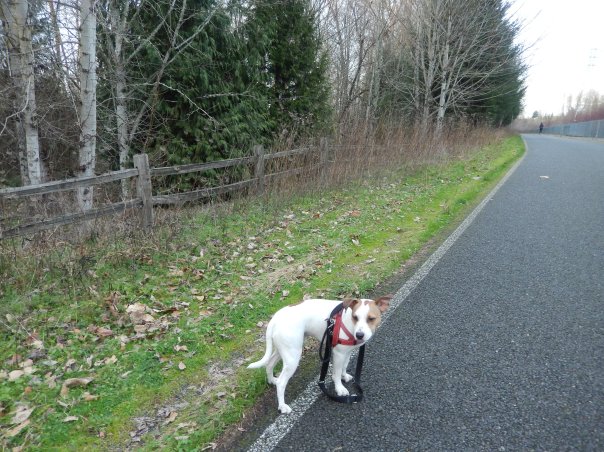 Jack doesn’t complain, but he was shivering

The summer heat seemed like it would never go when I went for  a walk to explore Meldrum Bar Park a week ago.  I found remote control racers, pretty woods, and more great river shoreline, here with access for boaters.

Now the rain and gray have returned, and the autumn colors are rising in treetops.    I was definitely ready for the change.

Ross Island sits in the middle of a river in the middle of the largest city in Oregon.  Knowing a company has long dredged the island for sand and gravel, I’d never before considered it as an outdoor adventure destination. Yet walking part of its shore after a short kayak trip, I found plenty picturesque scenery evoking 19th century landscape artists. Paddling from Sellwood Park in our inflatable kayak did not take us too long, but onshore, it quickly assumed the guise of an older, more natural world.  We opted to leave the kayak and walk around the eastern short, not understanding how large the island is, and we were wearing only water shoes on our feet.

After rounding a corner, we navigated among exposed gravelly shoals along a channel between Ross Island and East Island.  In a couple months, the water level will likely preclude walking there. As it was, the shallow water and gravel made for unique walking.  Eventually, we passed a few boats anchored in the deeper parts of the channel. They appeared to be residential in nature.  Someone called out about needing to go shopping.  I wondered how they survived long term.

Meanwhile, paddle-boarders and kayakers meandered along the channel toward the point at which Ross Island opens into a large bay where the dredging still occurs.  There is much industrial machinery on the east side of the bay.   We tried to find a path into the heart of the island to cut back to our staring point but it was too brushy.  There were walls of blackberry bushes

twenty feet high.  Truly, this was a good little adventure.  Next time, we will kayak further up the west side and check that out. Our kayak trip upstream was a little tougher, especially because we had developed a slow leak in the kayak.  I’d brought the pump and had to keep re-inflating.  That effort added to the adventure, but we were glad to be done.