For hikers, the Wallowa Mountains are one of the most stunning areas in the Pacific Northwest.  It’s a land of rocky 9000 foot peaks, emerald lakes, and long lush river valleys dotted with meadows.  I went there in August for some peakbagging and camped at Ice Lake after bagging a minor peak my first day.

My sights were set on the two highest peaks in the area, Sacagawea and Matterhorn, which are connected by a narrow ridge.   I’d read on Summitpost about the traverse between the peaks, and it sounded amazing.  The route was almost completely above treeline, would involve scrambling, and there would be spectacular views.  For me, it might be a bucket-list-worthy adventure.

I woke early and set out, my legs a bit leaden as I climbed away from the lake.  I needed coffee, but I plodded onward and upward without it, the Matterhorn’s massive slopes of white limestone enticing me, juxtaposed with a reddish rock apparently volcanic in nature.  Amazing stuff. 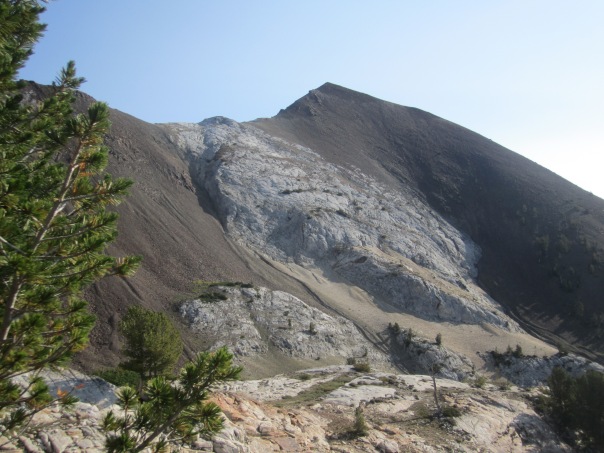 A limestone tongue interrupts the rusty hues of the Hurwal Divide. My final descent was just out of the picture to the left.

Two thirds of the way up, the rest of the route became clear, and I took time to rest.  As I sat, two people passed me.  I felt slow, old, and out of shape, even after a good summer of hiking.  The mountain was humbling me.  Soon, I was hiking diagonally up a steep reddish slope denuded of vegetation, a gulf opening up to my right.  Then I crested a ridge of sorts and got views to the south.  From there, it was a rocky scramble up limestone.

Looking past Matterhorn to Point 9775, the gendarme ridge, and Sacagawea

The man and woman who had passed me were standing on one of two summit points, so I joined them.  She had started from the Wallowa Lake trailhead at six a.m., hiking eleven or twelve miles with five thousand feet of elevation gain in under four hours.  Impressive. When I found out she was a Forest Service wilderness ranger, it all made sense.  After we exchanged pleasantries, the others headed down, while I sighted down the long ridge north toward Sacagawea.  The adventure really began here, where the trail ended.

As I descended, I found fist to football-sized rocks of a basaltic nature scattered like rust-colored sprinkles on the limestone. 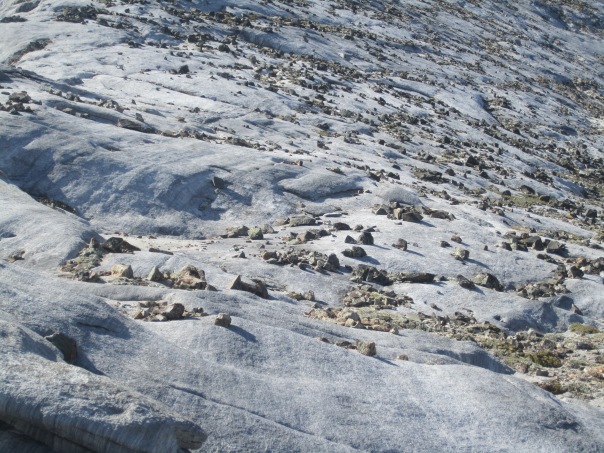 Sam Cooke might sing, “Don’t know much about geology…”

Funky limestone bench. Part of Eagle Cap and Needle Point in the background.

After bypassing a subpeak on the ridge, I wound my way through, around, and over various gendarmes on the ridge, steep drop offs on either side.   The going was more complicated than expected.  I had to choose my route and use my hands more than expected, so  I tucked my trekking poles behind my back and tried to think of myself as a mountain goat—okay, an aging one with a spare tire.   It worked. 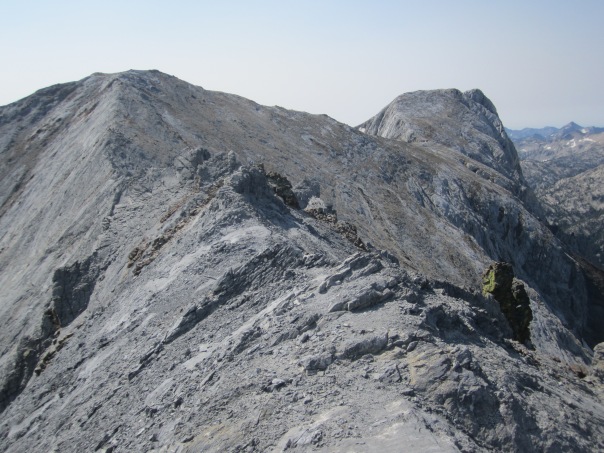 Looking back toward Matterhorn from the gendarme ridge

One of the many gendarmes. Probably twenty five high. Sacagawea summit in background.

I cleared the gendarmes in fifty minutes and soon was atop Sacagawea’s rockpile summit, where the sublime view opens up to the north and the colorful slopes of Twin Peaks and Chief Joseph Mountain.  Where I’d felt old earlier, I was an ecstatic kid now.  It was not yet noon and I’d bagged my second peak of the day.  Woo hoo! 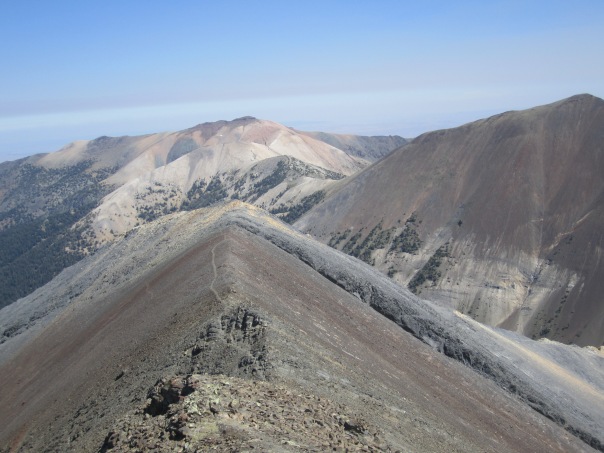 I signed the summit register, then relaxed on a perfect throne rock while I ate, drank, and contemplated my place in the universe.   And it was good.  I wondered if anybody would scale the East Ridge from the Thorp Creek Valley below, but nobody appeared.  In fact, I hadn’t felt such solitude in years.   I could have stayed up there for hours, but I also like to move, and move I did.

I wanted to vary my descent route so I could avoid re-climbing the Matterhorn summit block. Instead, I’d drop down the east ridge of Point 9775, then descend the massive scree slopes to the south.

Point 9775 on the right from Sacagawea. My descent would drop down the east ridge toward the dark  area on the left, then plunge off the backside.

Clambering over the gendarmes felt trickier in reverse, confirming that it was not for the inexperienced or those who fear heights.  I also found Point 9775 to be a fine summit, perched as it is between Matterhorn and Sacagawea, with great looks at Hurwal Divide to the east and Hurricane Divide to the west.

The descent from Point 9775. Compare with the third picture on this post (from the Matterhorn ascent).

The start of the descent was tricky, the surface constantly shifting from solid limestone to loose basalt chunks to ball-bearing scree over limestone, and finally a long slope of just sandy scree where I could move quickly.  Near the bottom, a flash of white caught my eye.  Mountain goats!  I tried to get close enough for good photos, but they kept moving, clambering from the wildflower basin onto a limestone crag.  It felt like the perfect ending to my adventure.

“We don’t need no stinking rope,” sayeth the goats.  Steeper than it looks.

I returned to my tent about two p.m., pleased with the day’s travels.  It seemed amazing that I’d covered so much ground, and it was all great hiking and challenging scrambling with stunning views.  I would recommend the off trail section of the route only for confident scramblers, while trail hikers can still bag Matterhorn by itself.  Either way, you can’t lose in the heart of the Wallowas.  My hunch was right.  These peaks definitely provide bucket-list worthy adventure, even for aging mountain goats.