The Columbia River Gorge is said to have a higher concentration significant waterfalls than almost anywhere in North America.   Multnomah is popular as the second highest waterfall in the U.S., but there are dozens of other cascades to view.   On the Oregon side of the river, it’s easy to have many options and go hiking to various  waterfalls, on a small scale or large.

The lower part of Horsetail Falls

Horsetail Falls is just south of the old scenic highway a couple miles east of Multnomah Falls.  A great waterfall hike begins to the left of the observation area. The path climbs immediately, but it is graded well as it goes through some switchbacks. 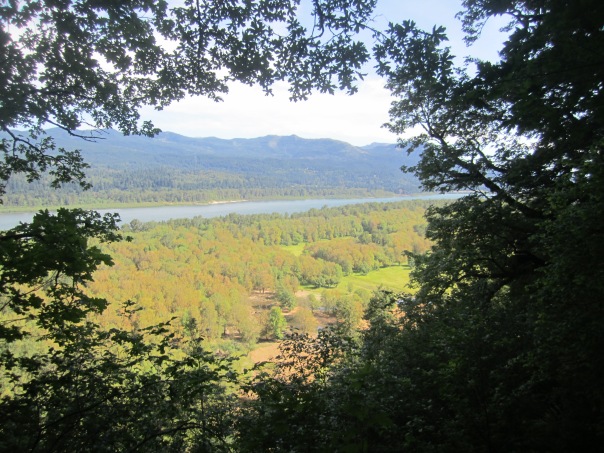 Traversing the slope, views opened up.

The switchbacks stop in ten minutes and the trail curves back along Horsetail Creek.  Soon the trail gives a tremendous look at Ponytail Falls.  As I approached, I realized the path  would actually duck behind the falls.

This falls isn’t huge, but this is one of prettier waterfalls I had seen in a while, in the Columbia Gorge or elsewhere.

For some reason, looking out at the falls, I felt like Gollum.  My precious!

I didn’t dally in the lovely spot, as there wasn’t a great place to sit.  Time for effort.  The trail now climbed gradually away from the falls.

You can see the obvious dirt and rock shelf where the trail goes behind the falls.

Continuing uphill, the trail started required a touch more effort, but that’s okay, as there are still two waterfalls to see.

Looking down at the hiker’s bridge

The trail crosses a divide and drops into another canyon, and as it crosses Oneonta Creek, there is a full frontal view of another waterfall.

Third waterfall of the day and it hasn’t even been an hour.

A junction shortly above this third falls gave me a choice. I headed uphill to see the elusive Triple Falls.   I knew the path in the  other direction headed down to the old Gorge Highway near Oneonta Gorge.  We’d save that for later. The hike to Triple Falls from here required some sweat, but it was worth it.

There need be no quiz about the origin of its name

After a quick photo op, the pup and I continued to the bridge beyond, and found a spot to relax for ten or fifteen minutes. Two other groups arrived at the bridge within  a few minutes. We all seem to have the same idea, taking a load off for a while and enjoying the lovely area near above the waterfall.

Jackie Chan the Wonderdog in the beautiful creek above Triple Falls

After the aforementioned relaxation, we wandered uphill for a while.    It connects to other trails, but I had no time for massive loops.  I was just here for a nice little waterfall hike. 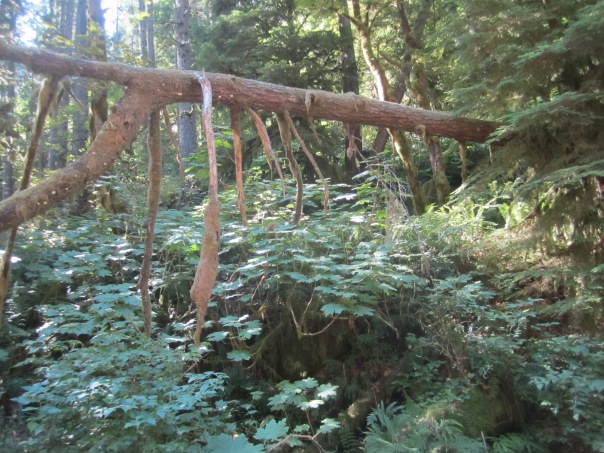 This tree seemed like a giant wood bug of some sort

After a rest, I continued uphill behind the father and son for ten minutes or so, but eventually turned back.   I passed back over the bridge, got another great view of Triple Falls, then motored downhill while I still had some pep in the step.

I veered off at the  junction to get some views to the west.  As the trail came around a ridge,  there was a very tired sign for a viewpoint.  I took a look, then quickly continued down the main trail.

Viewpoint, looking west along the Columbia

The old scenic highway was suddenly right below, and it didn’t take long to descend the rest of the way.   I had to walk along the road for a while, but that was fine.

Cool crags above the road west of Oneonta Gorge

The tunnel where the road once went?

After passing the entrance to Oneonta Gorge, I cruised through a tunnel and was soon back at my car.  This was a nice hike with a lot of natural beauty.  There were a fair amount of hikers, but it never felt intrusive except close to the road.    For a modest effort, this trail is hard to beat if you’re in the mood for some waterfall hiking.

Waterscapes of Gorge and Mount

After picking Denise up at the Portland airport late Friday night, I pointed our van east toward towards the shadows of the Columbia Gorge.  We had a vague plan to camp in the van with our dogs and ended up finding an empty spot at Ainsworth State Park.  Early Saturday, after a brief slumber, in earshot of trains, we packed up, semi-prepared to do some hiking in the green depths of the Gorge.

Our first stop in the cool morning was one of the classic cascades along the old scenic highway, Horsetail Falls. 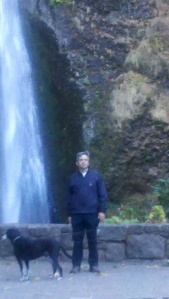 It plunges 192 feet into a lovely pool just a few yards from the road.  When we first arrived, there were a few other people there.  Just east of the falls, a trail system takes off uphill with possible loops connecting to Larch Mountain and Multnomah Falls.  Our sights were set on another spot, however, so we took a quick, inadequate snapshot, and with dogs on leash, headed west to the mouth of Oneonta Gorge.

The lush locale was featured in the October edition of Condé Nast Traveler magazine, complete with characters found only in Portland: a handsome bearded man in kilt and a woman in furry vest and skirts worthy of a Seurat painting.   Oneonta Gorge does not have an official trail, but that did not deter scramblers interested in its narrow confines.  Slot canyons are rare in Oregon, so a mossy basalt-cliff-lined gorge visible from the old highway is a real attraction.

We scrambled into the canyon and across a shallow creek.  A tall logjam loomed before us in a hundred yards, the walls of the canyon now only fifty or sixty feet wide.  Moss, fern, and lichen covered basalt cliffs soar vertically from the streambed.   There is no place for escape in a flash flood.

The dogs could not handle scrambling over the logjam, so Denise and I alternated turns exploring beyond the barrier, where the canyon narrowed even further.   Although it was completely Northwest in nature, the spot reminded me of the Zion Narrows in Utah.   It is truly one of a kind, but without serious boots, and with our pups, we were unprepared to hike too far upstream.  That would be another time, another adventure. 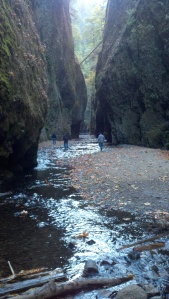 Other hikers put the scale of the place in perspective

We decided to complete the classic Mount Hood loop, so we headed to Hood River, where we went to a windsurfer beach and soaked up the wonderful October sun.  I actually briefly dozed while the dogs explored a bit. 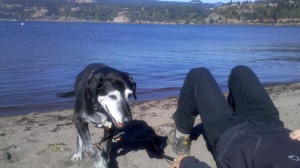 Nap time on the Columbia; a good day to be outdoors

We also watched a stand-up paddleboarder venture onto the Columbia.  Later, we had a midday nosh at a café and checked out one of our favorite tiny bookstores, Artifacts.

For the dogs’ sake, we wanted at least one more hike on the final leg of our journey.  That brought us to the Elk Meadows/Sahalie Falls trailhead near Mount Hood Meadows.  We had camped near Elk Meadows in the nineties with a couple friends.  This time, we headed toward Sahalie Falls.  The trail crosses near a road near Hood River Meadows, then cuts across a pleasant forested hillside towards the top of the falls.  While the view is not great, it was still a pleasant diversion.  The best view of all was near the road crossing, where one can see the open land at Hood River Meadows itself.

The slopes beyond hint at the skiing that could start in five weeks or so.  That seemed hard to fathom as the sun warmed us on the way back to the van.  Sometimes small jaunts add up to a greater adventure.  We headed home happy, glad to have shared such a trip together on a perfect day in the Northwest.