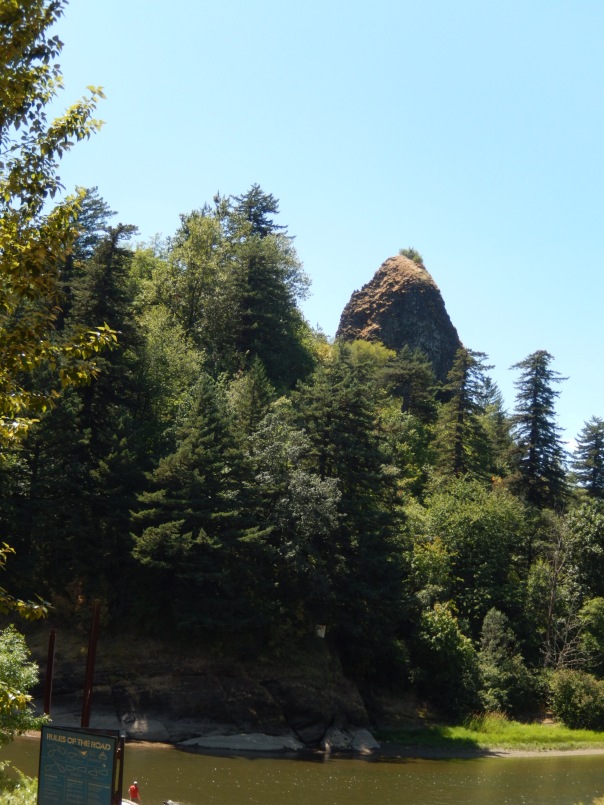 Rooster Rock State Park is named for a volcanic plug with an easy if not highly desirable climbing route up its south side. The climb is a standard venture for beginners, which I first did when I was 15 or so. The area may be more famous to Portland residents as the site of a “clothing optional” beach.  But enough about that (awkward!)  I ventured there yesterday not to re-live teenage climbing glory, nor to investigate the nude beach, but to wander the low ridge to the east.  It seemed a perfect barrier between river and highway with potential views of both water and nearby peaks. I wasn’t entirely wrong, but the best part of the trip was walking along the mighty Columbia and eying the ramparts of its famous gorge.

My stalwart companion Jackie Chan and I hiked east from the parking lot and found ourselves walking along a crazy disc golf course in the woods. It looked very difficult through the trees.  The trail stayed more or less level above the riverbank, but eventually dropped down after a mile or so and we emerged into a long meadow. Soon we arrived at the riverbank.  A family with young kids was playing in the water nearby.  We continued east for solitiude, meandering among sandy spots, grasses, and patches of forest.  Eventually the trail disappeared, and I reached a point where it got very rocky and narrow, so we turned back after checking out the avian wildlife on Sand Island.

We climbed up a washout spot into a broad meadow, and I found an obvious trail up the edge of it into the forest above.  The forest was pleasant although the highway noise detracted a bit from my enjoyment.  At one point, for half a mile or so, I noticed a lot of horsetails and I found that interesting, as we were on a ridge.  I had thought of them as being confined to swampy areas.  Apparently not.  In a little over an hour total, I was back at my car. This is not a strenuous hike, but it was just the ticket for us on this weekday.  Afterwards, I drove west for a closer look at Rooster Rock itself and its big brother, the much more impressive Crown Point on the south side of the highway–another teenage climbing memory. Today I am content with a hike in the vicinity.

Looking up from the parking lot at Crown Point

"The world is big and I want to have a good look at it before it gets dark.” ― John Muir
View all posts by Josh Baker »