While visiting the East Coast, I found time to get out and stretch my legs.   This spot in Laurel, Maryland, just miles from the D.C. Beltway, is a great spot for a mellow hike with big rewards.  Go early to void the humidity, and beware of ticks.  Jackie Chan the wonderdog found out about them the hard way, despite being on leash the entire time.

Interestingly, the Patuxent Wildlife Refuge, established in 1936 by President or Roosevelt, is the only “National Wildlife Refuge established to support wildlife research.”  For some reason, the U.S. Geological Survey does most of the research now.  Whatever works. 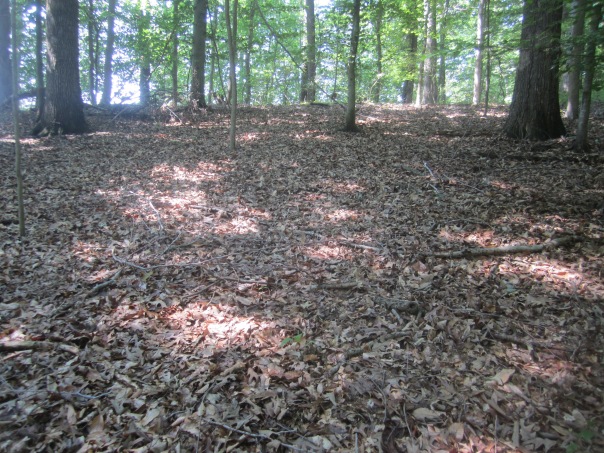 I’d heard there were hiking trails, but I didn’t know where to start.  My internal compass had me follow a sign to the South Tract and the parking lot for the visitor’s center.  I wasn’t sure if Jackie would be allowed, so my expectations were low as I drove through the gate.  I also was prepared to pay an entrance fee, but it was free.  Hard to grumble about taxes at times like that. 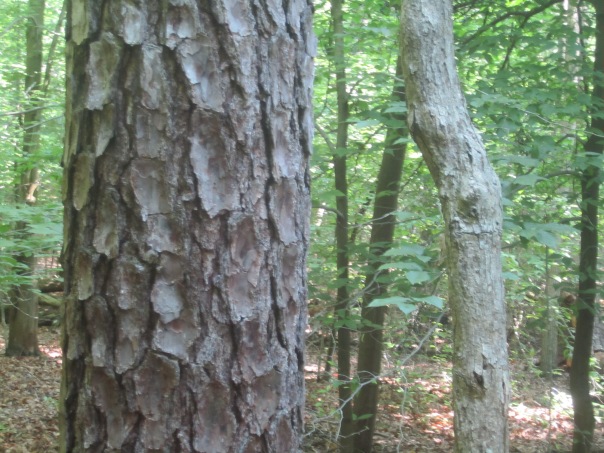 The visitor center had ample parking. The day was quite sunny and already close to 80 degrees, so I found a semi-shady spot.   As I got Jackie out of the car, I noticed a trail starting not fifty feet away, right on the edge of the entrance drive.  It had brochures and maps (with scannable bar code option) at a small kiosk .  The Fire Road Trail led through a flat forest of deciduous trees and little undergrowth, although there were some berry bushes by the trail. 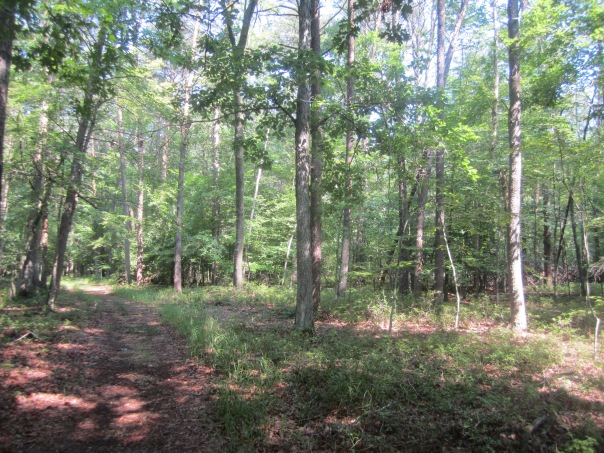 I had flashbacks to hiking in the Adirondacks, but this was too flat to truly compare.  The trail wanders between the entrance road and the exit road, crossing the latter after half a mile. It then goes into the woods and crosses an old powerline road, soon reaching a junction at the Valley Trail and the Laurel Trail.  Jackie loved all of this section,. sniffing away and checking out the sounds of the forest. 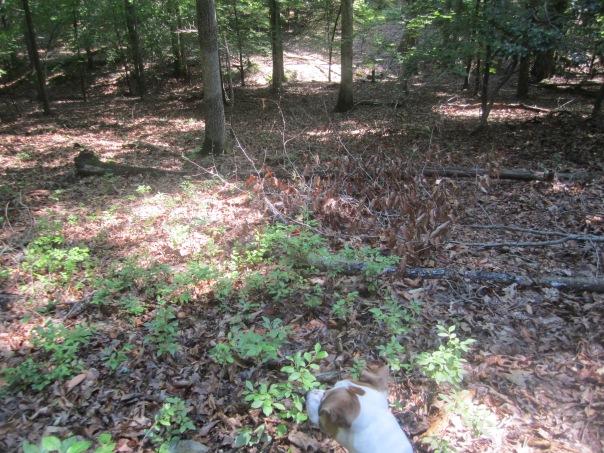 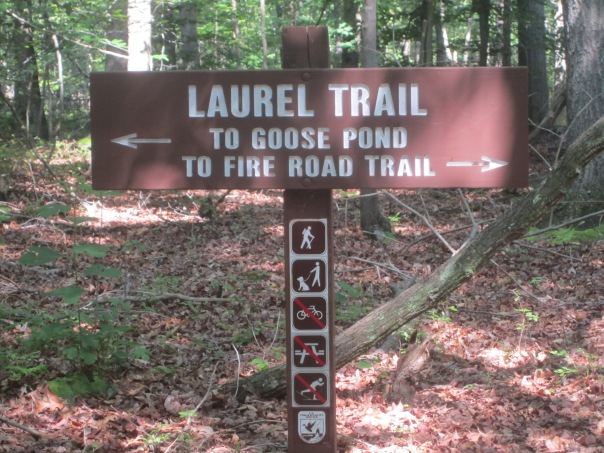 I appreciate the excellent signage

It’s possible to follow the Laurel Trail to Goose Pond and beyond it, the visitors center.   A longer route along the Valley Trail heads to the end of nearby Cash Lake, where at least one heron was hanging out on a piling, and red winged blackbirds sang in the marsh grasses.  The sun was high and sweat was rolling.

Bridge by end of Cash Lake

A few fishermen were at the foot of Cash Lake, where there is a fishing pier and access to the shore on the far side.  The far end of the pier is accessible by car or truck.  The trail continues on the far side of the lake, but it has seasonal closures for bird nesting, and it was closed when I was there. 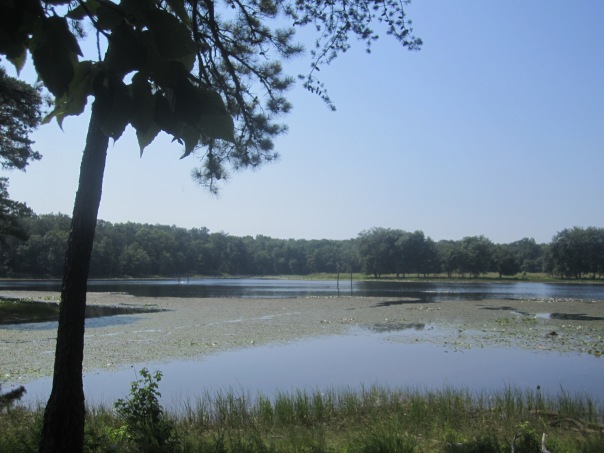 The return leg along the northern part of the lake also closes a nice loop, eventually meeting the Goose Pond trail and emerging right near the visitor center, across the parking lot from our start.

A large group of Canada Geese were slowly swimming through some Monet-invoking water lilies.   At first they’d seemed to be in stealth mode.  I counted at least 70 geese. 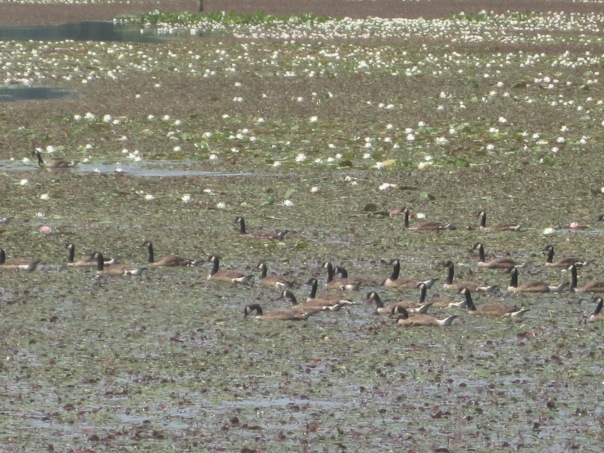 A few of the spy geese…

There were a couple nice spots to observe birds, the water, as well as the flora in the area. 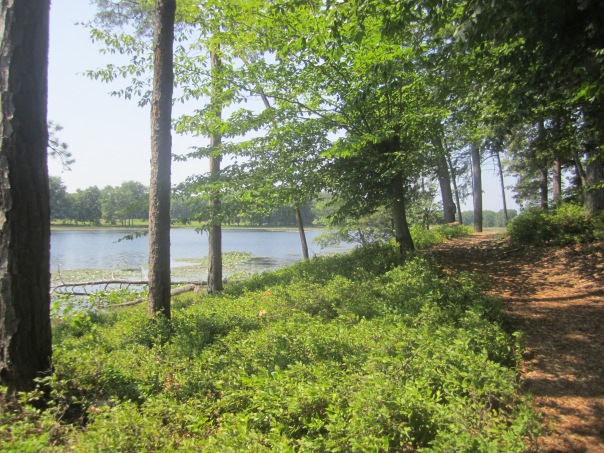 Along the edge of Cash Lake on the way back

All told, I hiked around three miles, and it was well worth the time.  I had to spend some time pulling ticks off Jackie and research Lyme Disease (almost unheard of in the Northwest), but I would still highly recommend the Patuxent Research Refuge for a casual hike.  With more time and fewer ticks, the visitor center would surely have been a great complement to the hike.

"The world is big and I want to have a good look at it before it gets dark.” ― John Muir
View all posts by Josh Baker »